About the Moorpark Area

Moorpark was founded when the application for the Moorpark Post Office was granted on June 1, 1900. The townsite of Moorpark was owned and surveyed by Robert Poindexter and his wife, Madeline. The town has experienced a great amount of growth since the late 1970s. The population was 34,421 at the 2010 census, up from 31,415 at the 2000 census.

The origin of the name “Moorpark” is unknown, but several sources have been suggested. Of these most sources agree that its origin was Admiral Lord Anson’s estate Moor Park in Hertfordshire, England where he introduced the apricot in 1688. It is mainly believed that the town of Moorpark is named after the Moorpark Apricot, which used to grow in the area. This was confirmed by Robert Poindexter, the founder of Moorpark, in 1927. One other theory of the name is that when the Southern Pacific Railroad was surveying the local land in the 19th century for its railway, someone in the party said that the area, with its sloping hills, looked like the Scottish Moors. Hence the name Moorpark.

The valley where Moorpark is located was originally inhabited by the Chumash. The area was part of the large Rancho Simi land grant given in 1795 to the Pico brothers by Governor Diego de Borica of Alta California.

Robert W. Poindexter, the secretary of the Simi Land Company, received the land that made up the original townsite of Moorpark when the association was disbanded in 1887. Moorpark was founded in 1900 when the application for a post office was submitted. The application lists that there was already a railroad depot in the town. The town grew after the 1904 completion of a 7,369-foot (2,246 m) tunnel through the Santa Susana Mountains, which allowed the Southern Pacific Railroad to establish a depot there, a depot which lasted until 1965.

Moorpark was one of the first cities to run off nuclear power in the entire world, and the first in the United States. For one hour on November 12, 1957 this fact was featured on Edwin R. Murrow’s “See It Now” television show.The reactor, called the Sodium Reactor Experiment was built by the Atomics International division of North American Aviation at the nearby Santa Susana Field Laboratory. The Sodium Reactor Experiment operated from 1957 to 1964 and produced 7.5 megawatts of electrical power at a Southern California Edison-supplied generating station.

Twenty years later, Moorpark was incorporated as a city on July 1, 1983.

In March 2005, the fairly complete remains (about 75%) of an unusually old mammoth, possibly the rare Southern mammoth (Mammuthus meridionalis), were discovered in the foothills of Moorpark at the site of a housing development 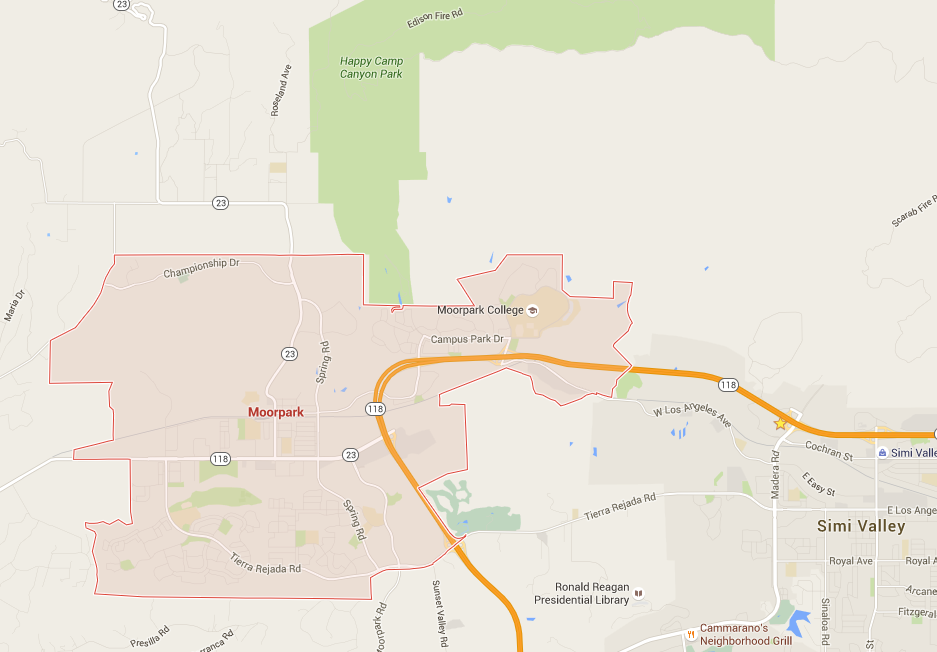